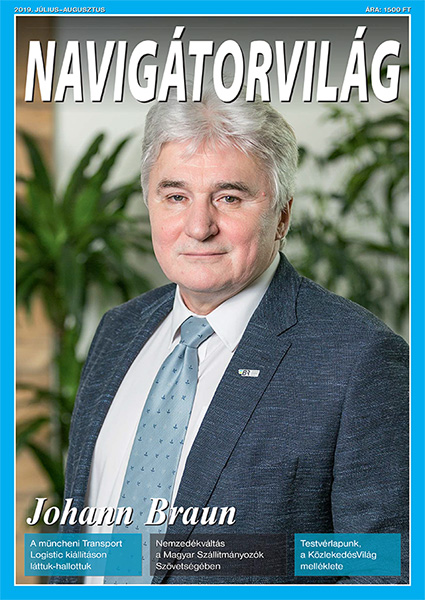 The Hungarian logistic magazine "NAVIGÁTORVILÁG" interviewed Mr. Johann Braun, managing director of BR ICS. This interview was put in place by Mr. Nemeth Nandor, Regional Manager of BR ICS Hungaria. Among other things, the origins of the company were explained, the load securing service was described and an outlook on future developments of the company was given. The interview was reduced to the essential.

Your company “BR ICS” stands out from other railway logistics service providers because it only concentrates on a small but important sub-activity, namely the approval of rail vehicles, the acquisition of safety certificates and the loading and securing of military equipment on railway wagons.

Why did you focus on these things?

I founded BR ICS in 2015. At that time, we only dealt with the approval of rail vehicles. When a member of the US Army contacted me, to win me as a partner for securing military equipment on railway wagons in Europe, the direction of my company changed.

After the U.S. Army set up a military base near Kaposvár in southern Hungary during the Bosnian War in the 1990s, my former employer, the Austrian federal railways (ÖBB), gave me the opportunity to support the redeployment as a “Wagenmeister”. The aim was to avoid unnecessary stops at the borders of the rail transport. Well, we did a quite good job.

At that time, the American armed forces themselves carried out the load securing in accordance with international load securing regulations and our instructions. However, the acquired competence and experience decreased over the years. When the US Army came back to Europe in the 2016/17, the know-how was gone

How is military equipment secured in Europe?

What is special about military transports?

International military transport is very different from other rail freight transports. Many of the “normal” goods that are transported by rail are subject to international agreements, which means that they are largely standardized and you have to follow the international loading regulations of the UIC.

It is "more interesting" for international military transports, because different types of equipment are transported, which means different types of loading and load securing techniques must be applied. In addition, due to the abundance of different types of military vehicles, it is immensely important to deal with the technical data of each vehicle in advance. To be taken into account and clarified permanently are for example load capacity and loading length of the railway wagon, dead weight and length of the military vehicle and when loading heavy equipment, the so-called meter load of a railway wagon. In addition, not only the UIC loading regulations must be applied for military transports, but also the loading guidelines of the NATO standards of AMandTP-1 (formerly AMovP-4).

Do you only work for Americans?

Our client is DB Cargo, which gives us orders from armies like the US Army. Besides the US Army we already carried out our service for the Norwegian Army, the Italian Army or the British Army.

What are the company's plans?

We keep adapting our service portfolio and the locations where our services are used. In this way, we strive to continuously improve the service quality and thus further expand customer satisfaction.